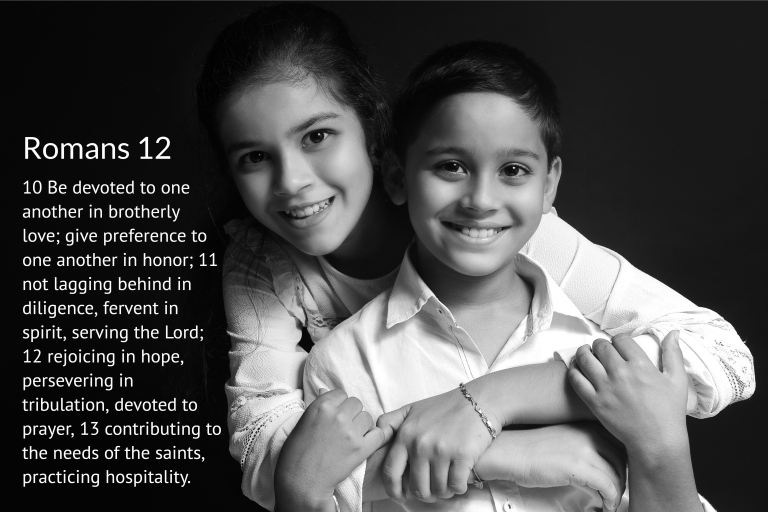 Mat 12:46-50
46 While he was still speaking to the people, behold, his mother and his brothers stood outside, asking to speak to him. 48 But he replied to the man who told him, “Who is my mother, and who are my brothers?” 49 And stretching out his hand toward his disciples, he said, “Here are my mother and my brothers! 50 For whoever does the will of my Father in heaven is my brother and sister and mother.”

I have seen people using the term brother, sister, mother, father, uncle and aunt in referring to others with endearment. A believer who grows up in these cultures, also naturally follows these same terms of endearment in referring to others. The problem however is not in the endearment but in expressing love which is devoid of truth because when a person is saved, he is no longer in fallen family of Adam but in saved family of Christ. The Bible says life is in the blood (Lev 17:11) but the Bible also says that the Spirit of Christ is a life-giving spirit (1Cor 15:45), which every true believer shares in. So, just as people can be related by a bloodline which they share in, so too people can also be related by the Spirit of Christ, which they share in.

Gal 3:16
16 Now the promises were spoken to Abraham and to his seed. He does not say, “And to seeds,” as referring to many, but rather to one, “And to your seed,” that is, Christ.

If you were to dwell a little on the above two verses, you will understand why Islam is a liar concerning Ishmael being the promised son of Abraham because Christ who is the seed of Abraham came through the bloodline of Isaac not Ishmael. So, today you have Christians all over the world because they all share in the living Spirit of Christ, who is the seed of Abraham. However, it seems Mohamed did not think his lies through in denying God-the-Holy-Spirit because with Mohamed denying the Triune Godhead, it implies that Muslims all over the world are all of the bloodline of Ishmael.

Psalm 61:5
For you, O God, have heard my vows; you have given me the heritage of those who fear your name.

It is said blood is thicker than water because it is far easier to be thick with someone you are related to that be thick with someone you are not related to by blood. So too, it is the same for those who are share in the Spirit of Christ. It is not that we are not to love those who are not in Christ. People who are not in Christ but within our area of influence, are our neighbours and these we are to love as ourselves (Mat 22:36-40) but what you do for a brother/sister in Christ is akin to doing it for Jesus himself (Mat 25:40). That is how thick we are commanded to be with our brothers and sisters in Christ (1Jn 3:23), because after all the life that is in the Spirit of Christ is greater than the life which is in the blood. I must however repeat saying that this does not mean we are to hate our own family, on the contrary that is for your family to naturally do for seeing the expression of God’s righteousness in your life (Mat 10:36), which they will unrighteously try to suppress unless God grants them repentance (2Cor 7:10). Despite this as a believer, you are not called to hate your neighbour but love them and be concerned about them as you are about yourself (Luke 6:27-33).

Mat 23:9
Do not call anyone on earth your father; for One is your Father, He who is in heaven.

Eph 5
8 for you were formerly darkness, but now you are Light in the Lord; walk as children of Light 9 (for the fruit of the Light consists in all goodness and righteousness and truth), 10 trying to learn what is pleasing to the Lord.

James 1:17
Every good thing given and every perfect gift is from above, coming down from the Father of lights, with whom there is no variation or shifting shadow.

If there is one peculiar thing about family, it is that they share certain common traits. The world recognizes Pathans for instance are brave, simple and sincere in their dealing with others, as these are the values inculcated in them by their parent in their upbringing. Similarly, there is a certain amount of pride that runs in the family. For example, Pashtuns swear before the world that “Pashto is the language of lions, jackals cannot understand it”. So also, as God has fathered/adopted us in His son Jesus Christ, by the very design of family, there are certain traits, which inherently exists in every believer (Eph 5:8-10 & James 1:17); and as much as a Pashtun will never be proud of calling himself a Pathan, so too a believer can never ascribe to the values he has learned as coming from the world. Rather the Christian is proud that he is taught of God (John 6:45 & Mat 23:9) and takes immense pride (Jer 9:23-24) in knowing Almighty God revealed to him in God’s Son Jesus Christ.

Jeremiah 9
23 Thus says the Lord, “Let not a wise man boast of his wisdom, and let not the mighty man boast of his might, let not a rich man boast of his riches; 24 but let him who boasts boast of this, that he understands and knows Me, that I am the Lord who exercises lovingkindness, justice and righteousness on earth; for I delight in these things,” declares the Lord.

Another detrimental aspect that exist in a believer calling a non-Christian a brother or sister is that calling someone brother is synonymous with sharing fellowship but as much as the Bible says light cannot fellowship with darkness (2Cor 6:14), so to a person who delights in sin cannot share and enjoy fellowship with one who delights in exercising the righteousness of God. So, the next time you as a believer wants to call someone who is not a believer with endearment, call them either politely as friend if you don’t their name or call them respectfully by their name but never as brother, sister, uncle, aunt, mother & father, that is unless they are related to you by blood in that way.

Only in Christ; one pleases God Post-Millennial Reformed Doctrine Spirit filled The Spiritual Law of God