Did you know that India’s Standard & Poor’s rating stands at “BBB-” implying we are adequate in capacity to meet our financial commitments but adverse economic conditions or changing circumstances are more likely to weaken our capacity to meet these financial commitments! India’s population is currently 1.345 billion, and according to ICE 360° Survey conducted in 2016 over 90% of the average monthly household income is under Rs. 35000. What worsens the matter is that there are over 400 thousand beggars in India as reported by NDTV in 2015, while DNA reported in 2016 that over 60 thousand children and kidnapped and forced into begging each year. Add to this the 21.5 million who work for the government with about 3 million in central government and 185 million employees working under state government. The reason am counting government employees it because these jobs are supported through the taxes paid by the common man. This is that socialist’s utopia that defines a democratic nation, that the people who are actually inching the nation onward are marginal in number but these are not helped in anyway, instead these are taxed further for the benefit of the rest who are sitting on their butts. It is for this reason that many of NASA’s scientists are Indian and the reason why Bose couldn’t find a market for his sound engineering in India (his home country) as he did in the USA on the count of its Christian environment, which makes it the land of opportunity like no other. 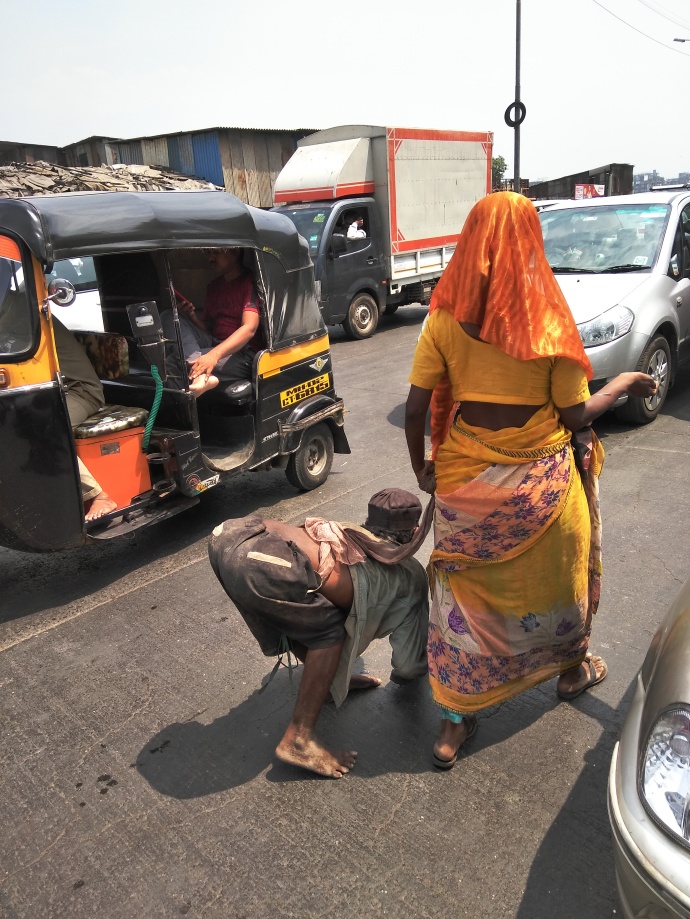 Coming back to India, there is nothing wrong with giving alms to people who are in need but the people who are in need are those who are struggle to see a better day, not those who are living off that religious gesture of alms giving. Sometime when I see beggars lined up outside Hindu Temples and Mosques, I think its almost like a set up to make the rich look good with their generosity that comes across as convenience to ease their conscience, as over people trying to help their neighbours learn to make a living for themselves. I think able-bodied, doesn’t necessarily mean handicapped but people who are willing to work hard for a living despite their physical or mental setbacks… which in other words is to carry your cross and follow Jesus, wherever it is you are in life (Lk 14:27). The Bible teaches us that Jesus is the way, the truth and the life and in him we learn something called dignity of life(Jn 14:6), which is a far cry from the self-righteously abusive mafia run begging business we see here in India. Yes, Jesus did heal and was sympathetic towards many beggars and lepers but after their encounter with Jesus they did not go back to being vessels of the people’s sympathy. Rather they became bold witnesses for the gospel standing against even people in power to speak out for Jesus (Jn 9:3-8, 16-27).

Mat 5
3 “Blessed are the poor in spirit,
for theirs is the kingdom of heaven.

I don’t know how many of you have watched this movie “Slum Dog Millionaire”, the maiming of people in that movie in preparing them to beg is as real as it gets in that movie. There have been newspaper reports where doctors have taken bribes from beggars to maim them, that people may take pity on them and give them money. The problem is not so much about people being financially poor but about them being spiritually poor and living in denial of it. If we were to look at the scripture mentioned above, we see that salvation involves coming to terms with God’s saving grace, that unmerited favour by which we learn how filthy our self-righteousness is before the Majesty of a perfect Triune God, who saves us in Jesus Christ. By this grace we receive in Christ, we receive a spiritual rebirth, which makes God interests our own interest and gives us that capacity to do His will and good pleasure (Eph 2:8-10).
Phil 3:14
I press on toward the goal to win the prize for which God has called me heavenward in Christ Jesus.

In India, there are many different kinds of beggars. Some of them are even revered by the people. Take the eunuchs for instance, whose blessing or curse is seemed to carry a lot of power as believed by many because they have seemingly given up their manhood for such a lifestyle of spiritual power. I remember my stupid cousin once offered a eunuch Rs. 5 in the local train to bless his little sister, his sister whom he today doesn’t talk to anymore. My colleague too, recently had a son and he laughingly told us that eunuchs came demanding Rs.5000 since he had a baby boy and he had to give it to them or else they would have taken his baby away. I lost my temper just listening to that… a bunch of castrated men come demanding a ransom from a father else they will kidnap the baby & this fool thinks it was the right thing to pay them the money. My righteous disgust at this reverence for eunuchs was however met by reproof from another fool of a colleague, who said that eunuch have supernatural powers in brings curses or blessings to pass and he said this with a tear rolling down his cheek. Also, I need to mention that according to the telegraph UK, there were about 2 million eunuchs in India as of 2014, who live in groups under a eunuch guru and make a living through begging. The funny thing, people who become eunuchs, do so because there’s money in it. It’s just like a beggar maiming himself to become subject for the people sympathy. It’s not a nice thing to live at the mercy of people, I get it but this is the curse of a godless society where people are not religiously tutored to love their neighbours as themselves. The masses from the fall of Adam think they are gods to themselves and so they will only help those who call upon their self-righteous pity or trigger their unholy fear because that is how people who are a law to themselves function.

Jesus has said that you can tell a tree by looking at it fruit (Mat 7:17-20) and when you look at how intricately beggars fit in from a sense of culture and religion in India, you come to know that what we are dealing with here is really a social problem fabricated by a pagan belief system. You must understand that there would no supply if there was no demand and so since the rich and powerful want to feel good in the self-righteousness, there is therefore a market for beggars in this country which is of no help to national growth as its only aim is to attempt the satisfy the godless pursuits of those who are in power in an environment where ignorance is bliss.

In Praise of Christ Jesus Christ is who He is only to the Christian Only in Christ; one pleases God repentance unto Christ self righteousness the Case for Theocracy